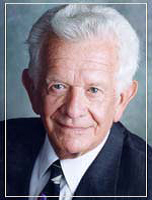 John O. Whitney had a diverse and illustrious career in academia and industry. He served as the Lead Director of Church and Dwight Co., Inc. where he was also a member of the Compensation & Organization and Audit Committees of the Board of Directors. He also served on the Advisory Board of Newsbank Corp. Professor Whitney passed away in 2013.

Professor Whitney held the Burnett Family Chair in leadership at the University of St. Thomas in Houston, TX, and was Professor Emeritus of Management at Columbia Business School, where he joined the faculty in 1986. Prior academic experience included seven years at the Harvard Business School where he taught Creative Marketing Strategy, was chairman of the Written Analysis of Cases course, and was Associate Dean from 1970 to 1972.

Much of Professor Whitney’s experience, however, was in the business world. He was an entrepreneur in Tulsa, Oklahoma, where he founded several businesses from 1955 to 1967, when he joined Harvard. After leaving Harvard he became president of the Pathmark Division of Supermarkets General Corporation, where he led his first business turnaround from 1972 to 1977. Subsequently, he has been chairman or CEO of other turnaround companies.

Professor Whitney received the Distinguished Alumnus Award of the University of Tulsa in 1979; and was awarded the 1988 Singhvi Prize for Teaching Excellence at the Columbia Business School, which he again won in 1996. He won the Dean’s Award for Innovation in the Curriculum in 2003. In 1993 he was named by Business Week’s guide to The Best Business Schools as “Columbia Business School’s most outstanding professor.” Business Week also listed him as one of the ten most sought-after professors in corporate executive education. He was chairman of the Harvard Business School Club of greater New York, a member of the Executive Council of the Harvard Business School, and was a member of the Joint Labor Management Council in Washington, D.C. from 1975 to 1977.

Professor Whitney’s article in the June-July 1996 issue of the Harvard Business Review, “Strategic Renewal for Business Units,” has been adopted as a planning tool for major corporations. He has also written for The Wall Street Journal, CEO Magazine, CFO Magazine, The Planning Review, The AMA Management Journal, and numerous other business publications.

His first book, Taking Charge: A Management Guide to Turnarounds and Troubled Companies, 1987, has been characterized as a “Bible” in the turnaround business. The Trust Factor was published by McGraw-Hill in September 1994, and was reprinted in 1995 as The Economics of Trust. His most recent book, Power Plays: Shakespeare’s Lessons in Leadership and Management (with Tina Packer) was published by Simon & Schuster in June 2000.

Need Help? Reach out to us at
johnwhitney@scholarshipamerica.org